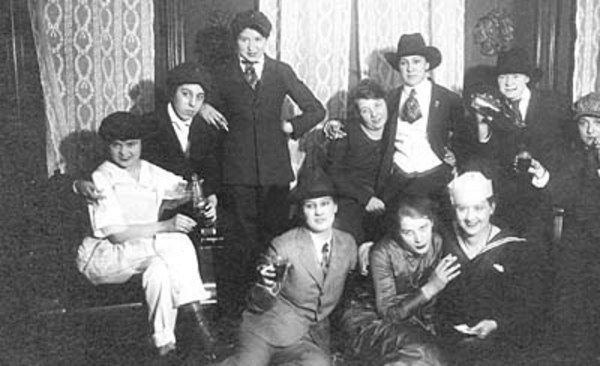 What is the connection between the Stonewall riots and organized crime?

On Wednesday, 2 May at 7 pm, I’ll be delivering a presentation at Forbes Library in Northampton, Massachusetts. My subject is the little known history of the Mafia’s involvement in the LGBT community in New York City, and how this culminated in the uprising at the Stonewall Inn, in 1969, where a new and powerful wave of LGBT activism was unleashed. Northampton’s own Pride Parade, which happens this year on the Saturday after my talk, has its roots, like all similar pride events worldwide, in the Stonewall riots.

This lecture is suitable for teens and adults. (I mention, but do not discuss, charged subjects including prostitution, drug use, and violence.) Admission is free.

Stonewall and the Mafia at Forbes flyer 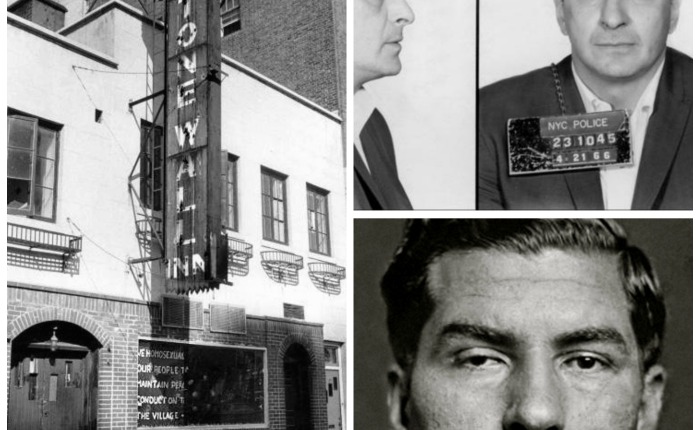 Lucky Luciano built the Genovese monopoly on gay nightlife in New York City in the 1930s. The Stonewall Inn was the site of a violent protest against police raids—and against mafia involvement in gay bars. Ed “The Skull” Murphy (top right) was working the door of the Stonewall Inn the night of the famous riot.

Of the Five Families of New York, Lucky Luciano’s was the one we now call the Genovese crime family. Originally the Morello gang, when Luciano took it over in 1931 it had been most recently run by Joe Masseria, Maranzano’s challenger in the Castellammarese War. Until 1957, when Vito Genovese went to prison for trafficking heroin through his gay bars, it was called the Luciano crime family.

Luciano had long experience in running brothels, bars, prostitution rings, and even drug smuggling. To support his speakeasies during Prohibition, Luciano had mafia-backed vendors for liquor, cigarette vending machines, pool tables, and most importantly, police protection. Investing in “fairy places” or “fag bars” was part of a diverse portfolio of organized crime, and an area in which the Luciano family excelled. Their monopoly on gay nightlife in New York City would not be broken for fifty years.

By the mid-1800s, New York had recognizable gay community in several neighborhoods, including Greenwich Village. In George Chauncey’s “Gay New York,” he writes that at least three different locations in Little Italy had young male prostitutes working in them in 1908. Phillip Crawford Jr, in his book, “The Mafia and the Gays,” writes that before Prohibition began in 1920, the LGBT community in the city enjoyed some degree of social acceptance in these gay enclaves.

Yet in 1923, the law in New York City prohibited loitering to solicit gay sex. When Prohibition was lifted, eleven years later, the new State Liquor Authority considered any establishment that served alcohol to gay customers to be “disorderly houses” or places where “unlawful practices are habitually carried on by the public.”

A wider group of Americans, including homosexuals, enjoyed a brief period of greater social acceptance during WWII, when everyone was needed in the war effort, whether in the service or as a civilian. When the war ended, large numbers of queer people in the military ended their service, and chose to remain in the cities where there was community. Gay spaces became even more coveted as LGBT people faced increasing discrimination in the Cold War years.

Although decriminalized after 1950, sodomy was still a misdemeanor, and various kinds of discrimination were still legally applied to the LGBT community. Apartment owners and employers did not have to rent to, or employ, people they knew or suspected were queer. A bar could lose its license not only by permitting same-sex kissing, touching, or dancing in their establishment, but simply by allowing gay people to congregate. In his book, Crawford offers an example in the 1965 investigation that shut down the Julius Restaurant: police descriptions of mincing gaits, tight clothes, and men who called one another “honey,” were the legal grounds on which the restaurant’s license was suspended.

The businesses that served the LGBT community, were those that paid off the police. And that meant gay bars were run by the mafia. Historians have connected all five of the families to gay bars in New York, with the majority belonging to the Genovese.

People who would today identify as members of the LGBT community, lived marginalized or hidden lives in the 1950s and 60s. “The down low” was the only option for virtually everyone who patronized gay establishments in those days. For transgender people, the options were extremely limited. “Butches,” “queens,” and other gender transgressors lived in danger roughly proportionate to their visible queerness. The more privileged members of the LGBT community, who could pass as heteronormative and cisgender, were by necessity closeted in most aspects of their lives. They, too, needed public spaces to meet their own kind in relative safety.

At the same time that tourists poured into Anna Genovese’s well-produced drag shows, vice squads enforced antiquated “sumptuary laws” that dictated the number of articles of clothing (some sources say three, others five) corresponding to one’s biological sex, which had to be worn at all times in public, or risk arrest for impersonation of the opposite sex.

In transgender activist Leslie Feinberg’s fictionalized autobiography, “Stone Butch Blues,” Feinberg’s alter ego, Jess, identifies as a butch and dresses as many transgender men do today, binding her chest and wearing a packer in her briefs. Jess and her butch friends work in factories, where they trade the relative freedom to be openly butch, for being the lowest-status workers, whatever their seniority.  When an older member of the community dies, her family buries her in a dress, a humiliation her friends also suffer, in order to be allowed to attend the funeral.

The gendered names, pronouns, clothes, and roles that queer people embraced, fifty years ago, are not the same ones used today by the majority of LGBT people. Choices were more limited, and both mainstream and queer cultures change over time. Feinberg’s book, which also depicts police violence in a bar raid, offers a window on a life that was not much documented, and was often purposely erased by family histories.

Being queer in the 1960s and early 70s was not just grounds for “black sheep” status in the family. Insurance companies would not bond anyone in the financial industry who had an arrest record, whether for “impersonation,” “lewd acts,” “solicitation,” or any of the other crimes under which gay life was categorized. To be publicly, noticeably (to straights) lesbian, gay, bisexual, or transgender was illegal, which meant accepting as a fact of life, socializing in spaces where illegal activity was protected and flourished. Mafia-managed bars ran the rackets that had always accompanied the gay bar trade, since at least the beginning of the century: prostitution of both sexes, including minors, pornography sale and production, drug trafficking, blackmail, and extortion.

In addition to crime, poor conditions and sleazy business practices went along with black markets, and gay bars were no exception. The Stonewall Inn was re-opened in 1967 by Tony Lauria, the son of a mafioso, with Genovese family backing, as a bottle club, meaning it didn’t need a liquor license. The Stonewall’s claim to fame was that it was the only gay bar in town that permitted dancing. The missing amenities included an emergency exit and running water. In 1969, the Stonewall was responsible for transmitting hepatitis by serving drinks in dirty, used glasses.

The mafia has always preyed upon the most downtrodden of its own people. Despite the predatory relationship between them, the mafia and the LGBT community, they were not mutually exclusive in their membership. Vito Genovese’s wife, Anna, ran one of his gay nightclubs and was reputed to be lesbian. Figures including David Petillo, Ed Murphy, and John D’Amato, tell us that gay mafiosi existed, with varying degrees of acceptance by the mafia, and by the gay community. Matty “the Horse” Ianniello, acting boss of the Genovese family for ten years (between prison terms for racketeering), was widely acknowledged as “the Genovese capo who controlled much of New York’s gay nightlife.” He paid off the police to protect Lauria’s Stonewall.

Ed Murphy (1926-1989), born Edward Francis Murphy and nicknamed “The Skull,” was a former pro wrestler (not to be confused with another wrestler called Skull Murphy, who died in 1970). Ed was a mafioso, and in 1969, a closeted gay man. He ran prostitution rings, and worked as a bouncer in gay bars. The Skull was working the door of the Stonewall the night of the police raid that kicked off the riots. The police, according to David Carter and Lucian K. Truscott IV, were targeting mafia activities, not the clientele, but as Zagria points out, if that was their goal, they were failures, from planning to execution. If you’re really going after someone for blackmailing closeted patrons, do you raid the bar when it’s open for business and full of customers? And then do you let your target slip away into the crowd while arresting a paddy wagon full of trans patrons?

The predation of both the police and the mafia were the targets of the fury that was unleashed when police raided the Stonewall Inn in June, 1969. One of the goals shared by the Gay Activists Alliance and Gay Liberation Front, two groups that came out of the Stonewall protests, was to get organized crime out of the gay bars. But with gay liberation, those same bars were now cash cows, and the mafia was less likely than ever to want to let go of them. It would be another generation before Giuliani’s aggressive targeting of organized crime in New York in the mid 1980s broke the monopoly on gay bars in the city. The anti-mafia part of the Stonewall story is virtually unknown in the LGBT community. Perhaps this is a sign of the mafia’s success in suppressing anti-mafia sentiment, and riding the coattails of the civil rights movement after Stonewall.

Christopher Street Liberation Day, as it was first called, commemorated the Stonewall uprising on its first anniversary, 28 June 1970, with a march from Greenwich Village to Central Park. Four years later the Stonewall’s old bouncer, Ed Murphy, convinced the committee to reverse the parade route to its present trajectory, so it ended on Christopher Street, where attendees could drink in the many Mafia-owned establishments. Murphy came out as gay in the late 70s, and rode in the parade with a sash calling him the Mayor of Christopher Street. He died of AIDS in 1989. Murphy’s obituary called him a gay-rights leader.

“Stonewall Riots: A Gay Protest Against Mafia Bars.” On the blog “Friends of Ours: Mostly About Organized Crime.” (Written by the author of “The Mafia and the Gays,” Phillip Crawford Jr.) Published 7 June 2010. Accessed http://bitterqueen.typepad.com/friends_of_ours/2010/06/the-stonewall-riots-a-gay-protest-against-mafia-bars.html 13 April 2016.

Nianias, Helen. “How the Mafia Once Controlled the New York Gay Scene” Interview with Phillip Crawford Jr, author of The Mafia and the Gays. Published 30 July 2015. Accessed http://www.vice.com/read/how-the-mafia-once-controlled-the-new-york-gay-scene-616 13 April 2016.