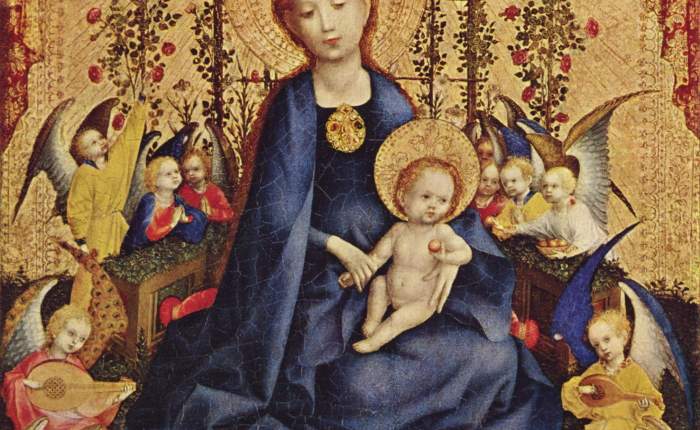 Sicilian names, first and last, are handed down through the generations.

There has probably always been someone named Lucia Marino in Corleone. If we got into a time machine and went back to any of the last 400 years, not only could we meet a Lucia Marino in this town, we could also find a man named Giuseppe Quaglino living here. Given names are nearly timeless here, because of the strong tradition of naming the first and second born of each gender, after the grandparents: first the paternal, then the maternal. Although there’s no formula for naming subsequent children, they are most often named after aunts and uncles, and sometimes great-grandparents. I’ve even found children named after a parent’s late, former spouse. In other words, children in Corleone are given family names—names with local and religious significance, that give further clues to a child’s lineage. Unlike American given names, which have been changing rapidly through the years, reflecting the individuality of our culture, Sicilian names, first and last, are handed down through the generations. As a result, a name has meaning to other Corleonesi, revealing a person’s position and connections in a way that surnames only begin to do.

When I made a count last year of the most popular names in 19th century Corleone, these were the top twelve for boys:

Other popular names that didn’t make the top twelve include Biagio, Gioachino, and Luciano for boys, and Leoluchina, Domenica, and Caterina for girls.

Some once popular names die out, for no reason I can discern: Elena, the patron of a local church, is one that is no longer given to girls. Other saints, no longer recognized by the Catholic Church, see their popularity wane but slowly. Ninfa (St. Nympha) was one of four patron saints of Palermo before 1624, with a feast day on the tenth of November. The virgin martyr of Palermo was determined never to have existed, however, and removed from martyrology. What was a popular name for girls in the 1700s, is now rare. Spiridione, another former saint, was the onomastico of Spiridione Castro, a cab man born in 1816, and one of the only people I’ve ever found with this name.

Settimo Castro, born in 1784, may have been named in honor of Pope Alexander VII, from the previous century, but I think it’s more likely he was named “Seventh” because he has six older brothers. None of Settimo or Spiridione’s grandsons inherited these unusual monikers. But the most popular given names, even from the 17th century, continue to be handed down. I still meet people who were born after me in Corleone, and are called after a grandparent or other close relative.

Local patron saints are popular names, as are the local churches and confraternities, named after saints and Catholic dogmatic concepts: the immaculate conception (Concetta and the less common Concetto), innocence (Innocenzo and Innocenza), salvation (Salvatore, Salvatrice), the rosary (Rosario, Rosaria). Parenthood, and particularly the stepfatherhood of Joseph, are especially revered among Sicilian Catholics, and this is reflected in the enormous popularity of the given names Maria and Giuseppe: Giuseppe Morello and Giuseppe Battaglia were named in honor of Jesus’ earthly father. Morello, also named after his paternal grandfather, lost his own father when he was five, and was brought up mainly by his stepfather, Bernardo Terranova.

Two given names that are technically different, but very often conflated, are Antonio and Antonino. Men baptized Antonio are called Antonino so frequently in the official records, that when I saw two defendants among those at Bari, Antonio Mancuso Marcello and Antonino Mancuso Marcello, with the same parents and different birth dates, that I thought at first there must be some mistake. As it turns out, even this confusion is inherited: the brothers are named after their paternal great-uncle and grandfather, respectively.

There are two versions of the events of the twenty-seventh of May 1860 in Corleone. There is the version every person from Corleone knows and celebrates in a church festival each spring, in the month following Easter. And then there is what really happened.

The popular story is that the revolution that birthed the Italian Republic, was aided by the miraculous intervention of one of Corleone’s patron saints, and one of the most important saints in Catholicism. Italian unification, the Catholic church, and the civic courage of Corleone are wedded in the miracle of 27 May 1860, and its annual commemoration with a race of the saints Leoluca and Antonio. This is a myth that unites a people. No wonder they don’t want to hear another story.

At least as powerful in mythology as the town’s association with the mafia, are Corleone’s reputations for faith, and revolutionary might. It is the town of a hundred churches, birthplace of the Sicilian Vespers and two saints, and the starting point of the revolution of 1848. In 1860, Corleone played a part in Garibaldi’s successful Expedition of the Thousand… the Corleonesi would say, a miraculous one.

Corleone’s hundred churches have (not quite) a hundred confraternities, many going back to medieval times, and each under the protection of a different saint. (Or pair of saints, like Constantine and his mother, Elena.) On important Church holidays, confraternities and their attendant marching bands hold processions, or parades, traveling between and among the churches of the town, in an order that holds religious significance, like the stations of the cross. On the festival of a saint important in Corleone, an icon, or life size effigy of the saint, is carried on a bier, like a king, and paraded through the streets.

In addition, many saints days have agricultural significance, marking times to harvest wheat, for instance (Santa Lucia) or slaughter pigs (Santa Teresa). In early spring is the best time to prune olive trees. San Leoluca’s feast day, on the first of March, is marked with bonfires that recall one of the saint’s miracles: a stack of firewood that carried itself.

Every year on the last Sunday of May (usually the fourth Sunday after Easter), in a celebration called “Cursa Santu Luca,” (“cursa” is Sicilian dialect for “corsa,” which means “race”) the saints’ icons are carried at a run, from the Borgo Piano, now the Piazza Falcone and Borsellino, to “Santu Lucuzza,” a chapel at the end of the village. The “Pietro Cipolla” community band, which has been in existence since at least 1860, when they greeted Garibaldi himself, plays the March of the Bersaglieri (the “Sharpshooters”), keeping pace with the saints.

The people of Corleone believe that San Leoluca and Sant’Antonio saved their city from the Bourbons, but as the author remarks on Dino Paternostro’s website, “Città Nuove Corleone, “The historical fact has a different explanation, but this is of little interest to people.” (“Il fatto storico ha una spiegazione diversa, ma questo alla gente interessa poco.”) Enrico Morucci also makes the point that people don’t care what “really” happened. Having a modern notion of history and cause and effect is as useful in this situation, he says, “as milk is to lemon.” Faith rewards us with power over the unknown, and tells us that every action, no matter how small, can be consequential. The collective faith of a group of people can start a revolution.

There were riots in Palermo during the festival season of that city’s patron saint, Rosalia, in the summers of 1773, 1813, and 1820. The people were starving. Penitent brotherhoods flogged themselves and people in the crowds. Insurrection was in the air, but Sicily was not yet powerful enough to break her bonds.

In 1848, the Bentivegna brothers of Corleone led a revolution against the Bourbons, which was also, ultimately, unsuccessful. At first, the mafia supported the revolution, but when things looked bleak, they switched sides. After the revolution, the mafia was strengthened by their support of the Bourbon king, who gave them contracts for jobs like tax collection, which were privatized and extremely lucrative. In this way, the mafia consolidated their power, and by 1860, was the most powerful force on the island, deciding the course of the next revolution.

The mafia has achieved an unprecedented level of power when a new leader wants to conquer Sicily, and must have the criminal organization’s consent to do so. Austrian troops could take away the ice trade in 1820, and the mafia might have won by betting on the house in 1848, but in 1860, Garibaldi had the mafia’s support, and kept it through to the end. In Francis Marion Crawford’s nonfictional account, The Rulers of the South, he writes, “when the Mafia joined Garibaldi, the Bourbons fell.”

Giuseppe Garibaldi was a revolutionary, but no radical. He courted landowners, including the leadership of the mafia, and ensured a smooth transition that would not disrupt their power. Rather than being the champion of the peasantry, it was men like Sr. Giuseppe Catinella of Corleone, a Carbonaro from a wealthy family, and whose grandfather represented the district in 1816, who were given positions in Garibaldi’s Italy. Angelo Paternostro, a veteran of Forty-Eight, was made mayor of Corleone, the month of the invasion. The younger Catinella was appointed to his grandfather’s old position in July.

Sicilians believed in the Redshirts’ imminent arrival, and this faith spurred insurrection all over the island, beginning in Palermo on the fourth of April. Leaders of the mafia in Palermo who had supported the revolution in 1848 (and the Bourbons in 1849), were revolutionaries, once again. Denis Mack Smith writes in his history that police were attacked and killed with such brutality in Palermo, that many left their posts.

After landing in Marsala, to the west, on the eleventh of May, Garibaldi and his volunteers began marching toward Messina, the port city in the east, closest to the Italian mainland. He declared Salemi Italy’s first capital—and himself, dictator—on the fourteenth. Using a ruse Garibaldi devised himself, his troops lured the Bourbon army out of the city to be met by Colonel Vincenzo Giordano Orsini. They engaged in a fierce battle outside Corleone, on May 27th, but Orsini’s men were a diversion from the real attack, which Garibaldi led on insurrectionary Palermo.

When General von Meckel, at the head of the Bourbon army, realized this, he was poised to loot Corleone, as punishment for the revolutionary town’s part in Garibaldi’s ruse. But they were fiercely resisted by several hundred well armed peasants—or possibly, by the apparition of two saints. In either event, the Cursa Santu Luca evokes the rapid retreat of von Meckel’s army.

The Bourbons launched a devastating bombardment against Palermo, but the Redshirts emerged triumphant. The next day, Garibaldi declared the Bourbon authority deposed from Palermo. Six weeks later, having conquered Sicily, he and the Thousand would cross the strait of Messina to Naples.