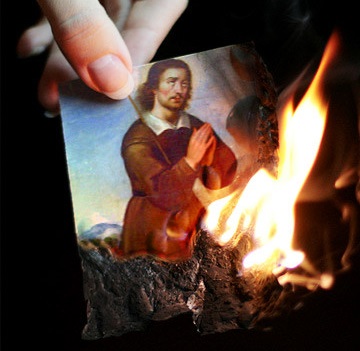 The image of a saint was often burned in the initiation ritual into the mafia. The feast day of Saint Isidore, patron of labrorers, is 15 May.

When the pioneering labor organizer Bernardino Verro joined the Mafia in the spring of 1893, he was inducted through a ritual involving his own blood, and the burning image of a skull.

The Fratuzzi leader at this turbulent time in Sicilian history was Giuseppe Battaglia. Critchley says that in December 1889, when Giovanni Vella was killed, the leader was Paolino Streva, whose uncle had led the cosca before him. Other sources, however, say that Battaglia took over leadership from the former capo, Salvatore Cutrera, in the early 1890s.

A proverb popular in the late 19th century in Sicily divided a peasant’s opportunities into two categories: immigrate, or become a criminal. Of course, some managed doing neither, and others did both. Birds of passage—migrant workers from Sicily who intended to return—included the father of Vito Ciancimino and his brothers, who were barbers and shoemakers. Giuseppe Morello‘s stepfather, Bernardo Terranova, and his family were also among the early wave of immigrants that left Corleone in the 1890s, seeking opportunity in America.

Critchley says that Gagliano was Giuseppe Morello’s uncle, but I have not been able to confirm this. The men shared a first name and with it, the common nickname “Piddu.” Using clues from two sources that give Battaglia’s year of birth and his father’s name to find his vital records, I’ve learned that Battaglia’s wife, Maria Rosa di Miceli, is a third cousin of Morello.

During a brief liberal period of Italian leadership around 1893, a worker’s movement arose, with Corleone as its hub. Bernardino Verro held one of the first labor conferences there in the summer of 1893, a few months after he joined the local mafia.

John Alcorn, writing about the Fasci Siciliani, offers another proverb to explain why Verro would have enlisted the aid of the criminal organization. “If he can take what you have, give him what he wants.” Unlike other successful labor movements that relied upon funds to support their members until the conclusion of negotiations, Corleone’s Fasci Siciliani (also called the Sicilian Leagues in English) used threats and violence to enforce the strike. In order to make a credible threat against landowners and potential scabs, Verro enlisted those who excelled at extorting and committing violence.

Because neither the mafia, the landowners, nor the peasants were as solidly organized as history can make them appear, the reality was one of strike interspersed with violence, but also with compromises from landowners, and strike-breaking laborers. At the end of the planting season, in the late fall, most workers were still locked out of their lands. A long simmering banking scandal erupted, taking the liberal prime minister with it. The Italian government switched to conservative rule, and peasants redirected their frustration from the landowners to the state. In the ensuing riots, government offices were burned down, and several dozen people were killed by troops who fired on demonstrators.

The failure of the strikes of 1893 to bring fair contracts, resulted in massive emigration from Sicily, writes Alcorn. An early wave of pioneering immigrants provides a critical mass in the destination country, making it easier for others to follow. As I’ve written in this blog before, part of the structure that evolved to provide such aid, was the early Sicilian Mafia in America.

John Alcorn. “Revolutionary Mafiosi: Voice and Exit in the 1890s.” Accessed http://www.comune.corleone.pa.it/file%20da%20scaricare/Saggi%20palermo1_Saggi%20palermo1.pdf 5 May 2016.